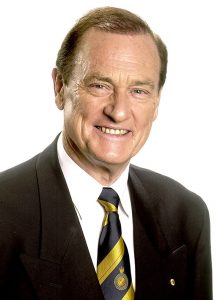 Born in Melbourne, Pete Smith was educated at Wesley College and on leaving school joined the Australian Broadcasting Commission.Beginning in 1956, he was with the ABC for eight years, initially as a messenger boy, before graduating to announcing on both the home service and on Radio Australia, broadcasting throughout the world on short-wave as it was then known.

In the early years of television Pete was associated with the ABC’s Channel 2, as announcer, variety host and compere of his own weekly Sports View Hit Parade each Saturday afternoon.

In 1964, Pete joined Channel 9, home of Graham Kennedy’s “In Melbourne Tonight”, for which he presented commercials, appeared in comedy sketches and on several occasions, acted as compere.

Over the years at Channel 9, Pete has been seen as on-camera host for numerous specials; at one stage in the seventies he was a National Nine newsreader.

On Channel 9 Pete was associated for many years with Bert Newton on the long running “New Faces” talent show and on Bert’s Tonight-style program. During the late seventies he was also the host of his own “Tonight Show” on NWS9 in Adelaide.

On radio in the sixties Pete worked with 3AK as a “Good Guy”… then with Bert Newton on the Greater 3UZ as it was known in the seventies, and in the late nineties he was associated with comedians Tony Martin and Mick Molloy on their national Austereo drive-time show.

Pete worked with The D-Generation on radio and followed them to ABC-TV with their well remembered “Late Show” series-remember the Aerosmith send-up “Dude looks like a lady” ?

He has also made a guest appearance on the current affairs spoof “Frontline” and performed in cabaret with Tony Martin, Mick Molloy and Judith Lucy.

On Channel 9, Pete was involved with Ernie Sigley and Denise Drysdale on their weekday morning program “Ernie and Denise”.

His was the voice that boomed out for over twenty one years (surely a record?) to welcome viewers to the popular quiz program, “Sale of the Century”.

He has released two nostalgic double CD’s of his favourite popular music featuring classic British Dance bands of the thirties and forties.

Pete has also been a guest on several occasions on the ABC’s “Spicks And Specks” program.

Recently celebrating 51 years at GTV 9, Pete is chairman of the GTV9 Foundation.

A Justice Of The Peace in Victoria, he was awarded an OAM in the 2004 Queens Birthday Honours list.

Pete is proud to be Patron of Golden Days Radio.